I love the Persona RPG franchise. I’ve been hooked since I played the first one on the original PlayStation in 1996, so you can imagine my excitement when Atlus gave me the opportunity to review the second spin-off to the very popular Persona 4 and sequel to 2012’s Persona 4 Arena, the 2D anime style fighting game, Persona 4 Arena Ultimax.

This game is developed by Arc System Works, and much like Guilty Gear and BlazBlue before it, Persona 4 Arena Ultimax (also known as P4AU) is heavy on the combos. For those of you who are new to fighting games in general, or simply haven’t played one in a while, there is an in-depth tutorial mode built in that I recommend checking out as it covers all the basics and some of the how-to on the combos. The fighting system is easy-to-learn but hard-to-master in that you can easily succeed through many fights by mashing buttons, but obviously, the big combos do the most damage so if you’re looking to compete online, you’re going to have to learn some of those else have your buttocks handed to you by someone who has. 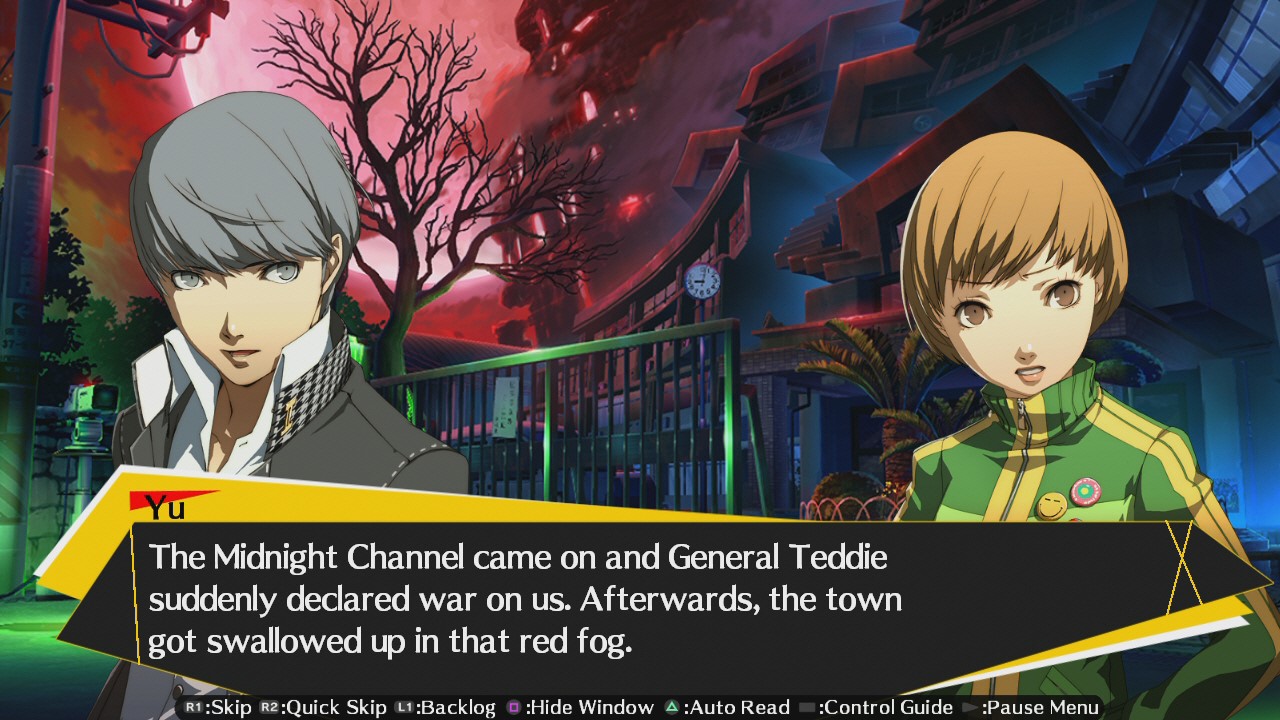 Just like with the previous game, there is a story mode and this is unfortunately one of the major downfalls, the story mode changes the game into “visual novel fighting simulator 2014”. Much like its predecessor, you will have to sit through sometimes upwards of 45 minutes of text mixed in with a bit of voice acting to get the story across, with frequently repeated themes in the story, this can get quite tedious quite fast, several times I thought of quitting the story and going to arcade mode just so I could string together a series of fights. Due to all the text walls, I would say the entire story mode takes about 20-30 hour to complete.

It’s important to note, however, that this is not saying the story is bad, it’s not. The story is compelling, fits well within the Persona 3 and Persona 4 universe, taking off right after the end of the P4A storyline and closing some of the plot holes from that story along the way. A giant red fog has overtaken the town of Inaba and a Tartarus-like tower has appeared on top of Gekkoukan High School. Much like Tartarus, all of Inaba has become a maze of sorts, making it hard for our heroes to traverse through the world and unravel this new mystery. Along the way, the various characters meet up with shadow-versions of themselves and have to fight. Why? Because General Teddie said so, that’s why. Or is it? There seems to be something far more mysterious at play, and to not spoil the rest of the story, I’ll just say it’s worth experiencing for yourself, even with the long stretches in between fights. 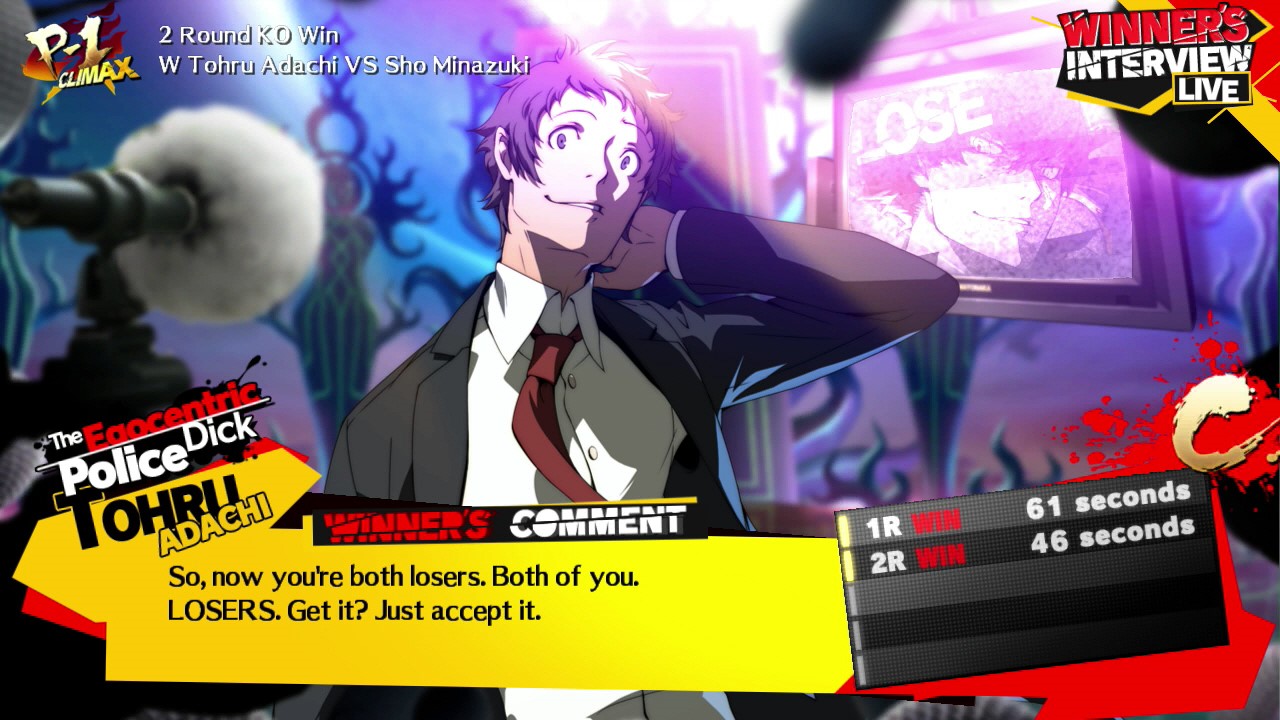 One thing I must mention, however, and this will come as a point of ire to some, is that you cannot 100% complete either chapter in the story mode without the Day-1 DLC character Tohru Adachi, and perhaps the other two planned DLC characters of Margaret and Marie. The Adachi DLC is free for the first week, and then you’ll have to pay for it as well as the other two when they arrive on October 7. I currently have 99% on both my chapters of my story mode waiting for this DLC to come out, and it’s pretty poor judgment on the part of Atlus to prevent completion of the story mode straight from the disc.

During the course of my review, the online portion of the game did not seem to be working, so unfortunately I did not get to play against another living breathing soul aside from a quick round of couch-competition I shared with a friend, where we both noted that some characters are a lot easier to win with than others. 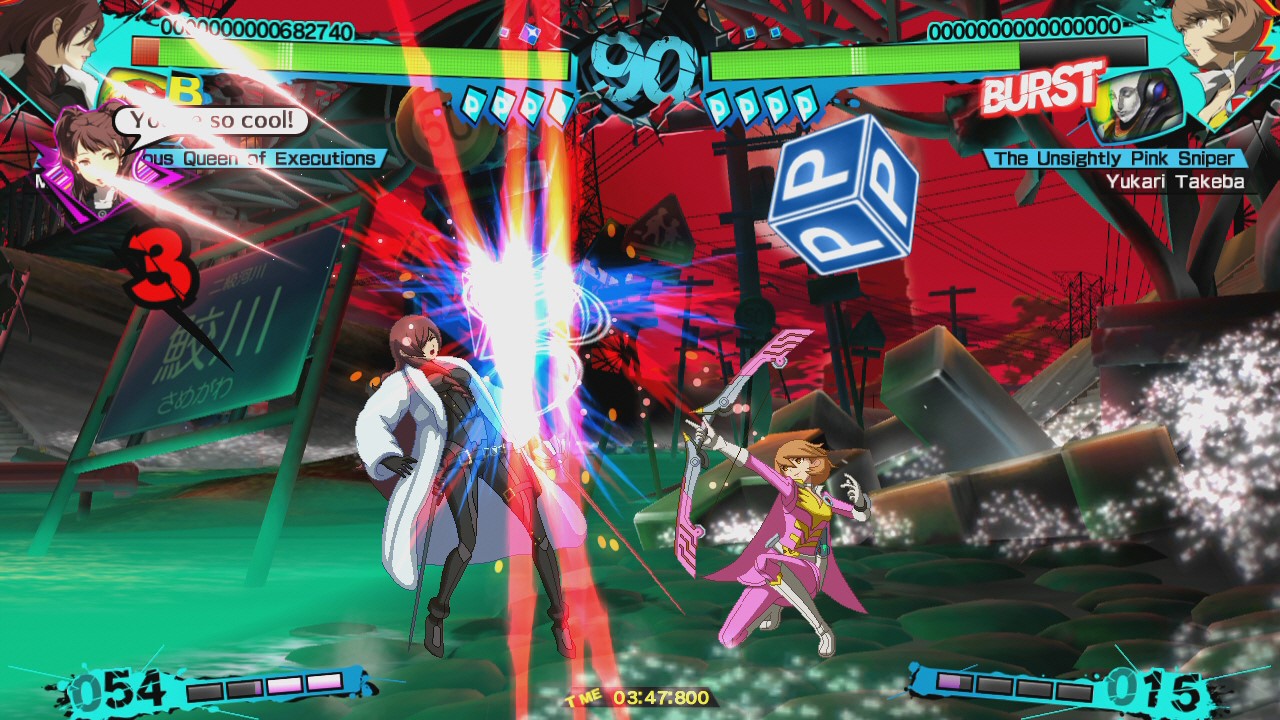 The cast of characters is mostly the same from P4A, with 6 new characters joining the fray, 4 of which are P3 and P4 favorites:  Junpei, Rise, Yukari, and Ken and his persona-wielding dog Koromaru. There are 2 new characters as well:  Sho Minazuki, and Sho Minazuki. Yes, that’s correct. You’ll get a better understanding of what’s happening there as you complete the story mode. The characters for the most part seem fairly balanced with the exception of Mitsuru Kirijo. She is entirely overpowered and will wipe out most other characters with relative ease. The only other time I encountered a fighter so powerful was once during the story mode when Aigis overclocked herself and turned her power up to 11 for one battle.

After spending sometime in versus mode I went back to fighting the AI through the various modes, Arcade (what you’d expect), Score Attack (a staple amongst Arc System Works games, a sort of “hell mode” against really tough fighters), and Golden Arena (an RPG like mode where you take your fighter as far down the dungeon as you can, levelling up along the way), and I can say that the game does trend a bit on the easier side at Normal difficulty. Fights are relatively easy as button mashing can win most fights, and I’d actually recommend that strategy against the story mode bosses. 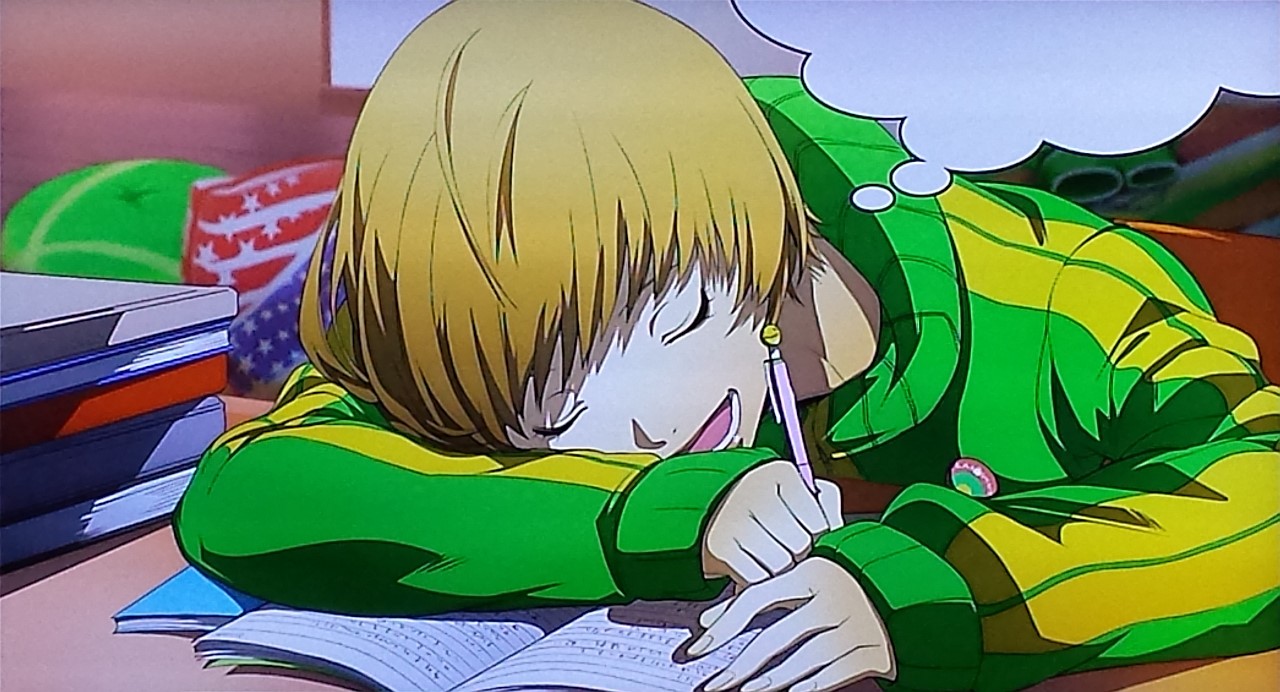 Closing Comments:  Overall, the Persona 4 Arena Ultimax experience is an enjoyable one, but I felt that if you weren’t enamored by the Persona world, this probably stacks up as a good, but average fighting game, and that most people would flock back to the Mortal Kombats and Street Fighters. Hopefully the online-components can keep people sticking around for a while though, because it does run smoothly and has potential to hang with the big boys.

When he was just 4 years old a gift came onto Mike that would change his whole life, that was the Atari 2600. Pitfall!, Combat, and Spider Fighter were his first true loves. From the Atari, came the Commodore 64, then onto the NES, Gameboy, SNES, PC, PlayStation, GBA, PS2, DS, PSP, Wii, PS3, Vita, Ouya, 3DS, PS4 and whatever comes next. Wait... No Genesis? No worries there, he had plenty of friends who had that console, so no missed experiences there either. After an exciting, but short career in broadcasting, he has been working as a cube slave for approximately 14 years now, and in that time he's learned to hone his creativity into a new outlet, games journalism. Fast forward to today and here he is looking to bring his point of view to the world. @Suburban_Hell