Murdered: Soul Suspect plot is very intriguing. Everything takes place in Salem, Massachusetts and you play as Detective Ronan O’Connor and the game starts with your death. Ronan is thrown out of a window while pursuing the brutal and relentless serial-killer, the Bell Killer, who then finishes Ronan off by shooting him. Revived as a ghost, Ronan meets the spirit of his long-dead wife Julia, who informs him that he can not join her until he completes the unfinished business binding him to the living world.

Ronan has to solve the mystery of his own death and to help him in this endeavour is Joy, a young girl who witnessed Ronan’s murder, and possesses the ability to see ghosts. The investigation leads them to a series of very cliched locations as a creepy church, creepy cemetery, a creepy mansion, a creepy asylum, you get the idea. But what’s more surprising is how good everything is tied together, how one investigation leads perfectly to the other one and so on. Slowly you begin to understand and uncover the mystery of the Bell Killer, his intentions, his victims and how everything is connected. It’s an original and very intriguing story, that has a great pacing and a twisty revelation. Also the interaction between, Ronan and Joy, the medium girl, is a very interesting one. He needs her, she needs him and seeing how their relationship develops throughout the 10 hours is very interesting. The dialogue is very well written and the voice acting is very solid. The same can be said for the character development. Ronan has a cool and dark backstory which is told in a rather cool way. For every powerful event or moment in his life being that a good or bad one, he has a tattoo on his body to remember that. Before getting killed, Ronan seemed to have an arrogant and overconfident streak to him, as he disregarded orders for backup and preferred to catch the hooded figure himself something that ultimately lead to his death. But we see a shift in his personality as he starts to see things under a different light now that he is a ghost and how this happens is quite enjoyable to see.

At the beginning I said that Murdered: Soul Suspect lacks “true” gameplay. Think of it like Gone Home or Dear Esther where everything you do or better say, can do is just walk and collect things. That is all you are going to do here, wander around the creepy locales to talk to other ghosts and collect like a gazillion of things. Occasionally you can exorcise a demon, but since the mechanic is awful, let’s just skip past that. As a ghost, Ronan can pass through pretty much anything as long as it doesn’t have a blue glow to it. Why this, is explained in the story. Ronan can also interact with other ghosts as in talk to them to find out what happened to them, in the end helping them ascend into heaven. But he can also interact with real life objects as in TVs, coffee machines etc. as a sort of poltergeist to distract the living humans. He can also possess them, but he can only read their minds or kinda influence them to remember stuff. This mechanic sounds cool in paper, but it is heavily scripted since most of the time you’ll know what to do so it’s not really that special. The same can be said for the deduction system. Once you have collected enough proof, you can finish the investigation by selecting the three most relevant proofs in order to progress. Again cool in paper, but since there is only one real choice and there is no penalty for getting it wrong several times, it’s not that special. Oh and I almost forgot, you can possess a cat so there’s that! 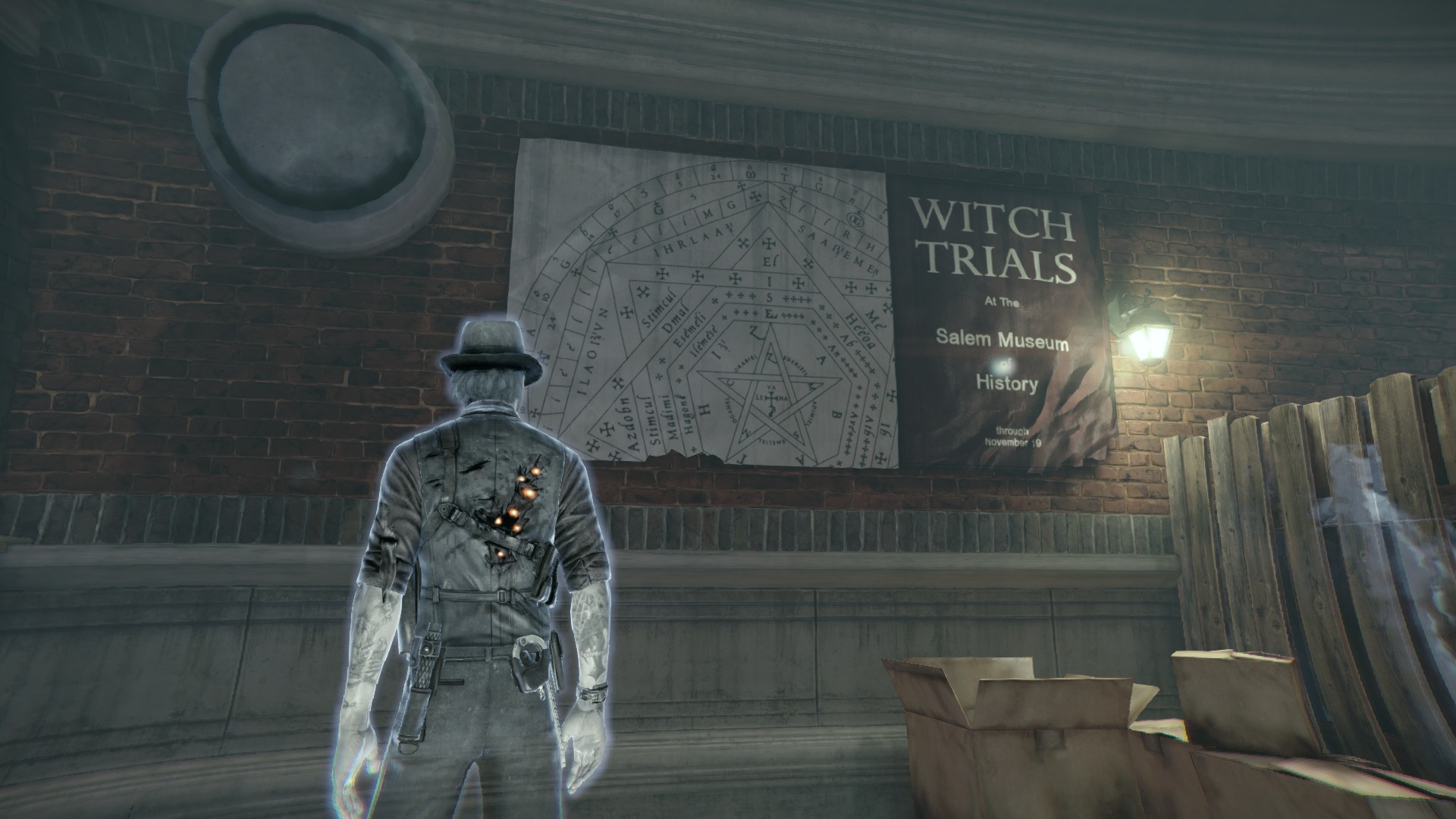 Murdered: Soul Suspect is a cross generation game, meaning that you can play it on the old gen (PS3 & X360) but also on the (PS4 & XOne). I, myself played it on a PS4 so I was expecting high graphical fidelity with next gen graphics, lighting and all that, but I was kinda disappointed. I cannot say that the game looks bad or anything like that, but there is no clear difference between the two versions. It looks the same in both and plays the same. The frame rate drops a lot at times, the texture pop-in is annoying and the load times are long for a 2014 game. Maybe this is the engine’s fault, since we all know the bugs of Unreal 3 engine, but it is really unacceptable. Luckily the artstyle and level design of the game redeem somehow these faults. Today’s Salem is a creepy town, with dark alleys, creepy buildings etc. Throw in the mix the old 1600’s Salem and you’ve got an even more creepy setting. The mix between the two creates a perfect dark and gloomy atmosphere that works perfectly with the story the game is trying to tell.

Murdered: Soul Suspect was, as I said, a really nice experience. The story, premise and setting are extremely well developed that combine perfectly telling an intriguing and very engaging tale. Unfortunately the gameplay wasn’t just not there to propel the game even further. Instead it holded it back making it tedious and boring for long stretches of times. In the end the advice I can give to you is don’t miss this experience, but just don’t buy it at full retail price. Thanks for reading!