Late to the Party: Enslaved: Odyssey to the West Review Andy Serkis sure loves monkeys, huh? So far he’s been punching dinosaurs in the face as King Kong, punching men in the face as the revolutionist chimp Caesar, and of course, starring in the adventure platformer, Enslaved: Odyssey to the West. As a man. Named Monkey. Who punches robots in the face.  Starting to think you might be typecast there, Andy.

Enslaved was a game that sat on the very edge of my periphery – I was aware that it was developed by Ninja Theory, the same team behind Heavenly Sword, but besides that I knew very little about it. Commercially, it also debuted at a rather unfortunate time; launching in October of 2010, it was perilously close to the release of several particularly anticipated names. Titles like Halo: Reach, Fable 3 and Fallout: New Vegas all hit the shelves within around a month of Enslaved, and so despite solid critical reception, it was sadly cast from the limelight, where it landed in a smelly quagmire of obscurity. 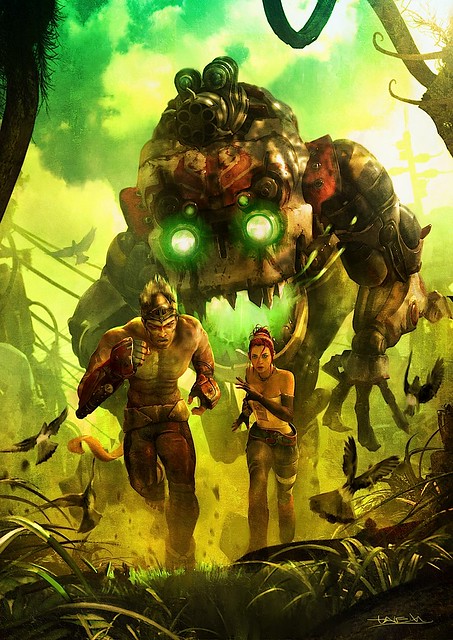 For me, it also released at a rather bad time. I had just started university, and so rather than thinking about games, I had other things on my mind: things like dealing with hangovers, finding a working washing machine, surviving on a diet of toast, and devising ways of getting girls to like me. Y’know, important things.

It wasn’t until just last week, as I was rummaging through a bargain bin, that I came across a copy of Enslaved. Intrigued, I decided to fork out five of my English pounds, and give it a go. The question is, four years on, how does it hold up?

Not too badly, it turns out.

An ambitious game, Enslaved set out to deliver a fairly linear experience that is heavily driven by the narrative, all the while combining various elements of action/adventure, puzzler and platforming genres. If you’ve played games like Uncharted, you’ll instantly be familiar with the formula; your goal is to get from A to B, and the path you’re sent down is punctuated frequently by fights, puzzles, a bit of clambering up stuff, and more often than not, awesome set pieces. Enslaved ticks all of these boxes, sewing its varied settings and locations together with quite a very well rounded story.

The story of Enslaved is based loosely on the classic Chinese literature ‘Journey to the West’; we see Monkey (Serkis) unwittingly being forced to escort a young girl, Trip, across a dangerous post-apocalyptic wasteland infested with vicious mechs. And you know what? For a war torn, post human vision of Earth, it looks damn pretty. Shunning the usual shades of brown and grey, Enslaved isn’t afraid to flex its artistic muscle, providing incredibly colourful and vibrant settings, from the remains of New York, through toxic scrap yards, all the way to mountain villages. Besides looking amazing, it also subtly feed us implications about the story which are never mentioned by the characters; remnants of office blocks and crumbling landmarks all hint towards some catastrophe, but it’s very much up to the player to fill in the blanks. Early in the game a palpable feeling of loneliness is quickly established, and it resonates throughout the adventure. It’s a shame that more of the areas aren’t as free to exploration as you might initially think; often you’ll find that sections of the game that look fairly vast and open are actually marred with quite restrictive invisible walls, or scenery that blocks the way.

I’m pleased to say that the fantastic art style doesn’t end with the scenery, as the characters are also a marvel to look at, particularly during the cutscenes. Even though I’ve played games like The Last of Us, the level of detail was still very impressive. The time that was spent on the motion capture has definitely paid off; the emotions they express look so genuine, and combined with the good writing, you easily become involved in the developing drama.

During the game you play as Monkey, who’s the muscle of the pair, engaging in fights, and moving debris so that the pair can continue. Trip is able to fit through small gaps, and get boosted up to higher ledges unreachable by Monkey. She also gets herself in trouble on a fairly regular basis, but never to the point where it becomes a frustration; Trip can safely be left alone, often stowing herself away during fights, and always having the good sense not to run into the middle of the nearest battle. This lends itself very well to some of the set pieces, as when she does need help (usually as part of a scripted event), it seems all the more intense, just because you become so used to her being able to handle herself.

The controls are, initially, rather frustrating; at the beginning of the game I found them to be a bit imprecise, mainly in terms of movement. However, it wasn’t long before I adjusted, and actually became quite comfortable with them. The platforming is extremely straightforward, as Monkey will only jump if there is something for him to grab onto. Despite that there are some really exhilarating climbing sections (the post apocalypse is a veritable playground, it turns out), it all became a bit easy once I realised that it was quite hard to die – I could just move the stick vaguely in the right direction and mash the jump button until Monkey moved to the next ledge. As a result, any sense of danger was lost on me, and even when the game added extra obstacles such as incoming gunfire or collapsing ledges, I still found it to be a little on the easy side.

The controls during combat are solid, albeit lacking in substance. There’s your standard heavy attack, light attack and shield. Ranged attacks eventually become available, and a few additional moves can be unlocked via the upgrade menu, but really that’s all there is. There’s enough for the player to have fun with, and they are fairly difficult to master (the counterattack gave me particular trouble), but at the same time I feel like there could have been so much more to it. It’s ultimately pretty satisfying, but especially towards the end of the game when the enemies become more numerous, it does start to feel like a bit of a chore. This isn’t helped by the fact that the enemies in question are also sorely lacking in variety. Don’t get me wrong, they’re all really well designed; Ninja Theory have, in stark contrast to the beautiful environments, made them all look suitably dirty and industrial. They look as though were made from bits of scrap, and are really quite menacing as a result. For the most part, however, you’ll face the same three or four variants of the mechs, and once you’ve worked out a tactic for dispatching each one, it just becomes a case of rinsing and repeating. Thankfully, the inclusion of boss mechs helps to break these sections up. Besides being unique enemies that you rarely see, and as well as being fairly challenging, they are often part of a larger set piece.

And it’s the set pieces that make Enslaved shine. Rather than using them simply as a cool way to end a level, Ninja Theory utilizes them as a way to drive the story forward, developing the characters and fleshing out their world. I suppose that it’s this that sets it apart from other action games; where other titles might use set pieces as an opportunity to inject adrenaline, Enslaved uses them for the narrative, and it works. That’s not to say that the entire plot is supported by set pieces, and in fact, Enslaved frequently demonstrates that it’s capable of more subtle moments. It’s clear that a lot of time was spent honing the direction and tone of Enslaved, and when it comes down to it, the plot is probably the game’s strongest facet. Again, it’s not perfect, and it has a few issues. In the latter portion of the game, for example, a third character is introduced, bringing with him some misplaced attempts at humor. I understand that the plot could’ve done with some comic relief, but near the end of the game, it just doesn’t feel like an appropriate presence. Additionally, the final chapters feel a bit abrupt; the early stages do a great job of making it feel like you’re really on an epic journey. Later, however, the sections all feel a bit shorter, and the characters start crossing great swathes of land during cutscenes. Because of this, the pacing of the story fluctuates, and it feels like they are just rushing to get to the end.  However, besides issues like these, the story is great; it builds a fantastic sense of scale, and has enough mystery to keep you guessing until the end. 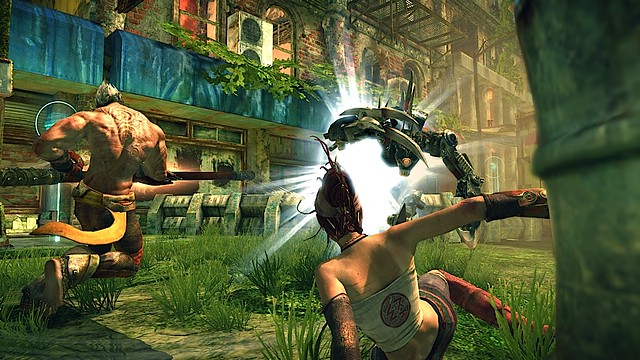 Bottom Line:Enslaved’s biggest problem is that it suffers from trying to do too much. It’s tough to review without constantly comparing it to other titles, simply because it often feels so similar to them. Because of this, parts of the game, the combat or platforming for example, really feel like they should’ve been explored further and brought up to par with the competition. Combined with the fact that it’s a relatively short game, with no online functions or multiplayer, it’s clear why the game maybe didn’t linger in the public eye for long. That said, it’s a solid, unforgettable experience. Throughout the game, your objectives are constantly changing, and it never allows the player to become bored. Despite the problems facing the gameplay, the excellent set pieces and story make them entirely forgivable. Throw in the gorgeous visuals and interesting, well developed, characters, and you’ve got action adventure game that every fan of the genre deserves to play.