There has been a buzz around the future of mobile gaming and its likelihood of becoming the top gaming platform. TouchVision released a video on Yahoo! that talks about the expected growth within the industry. The video states that the mobile gaming industry could become a $100 billion—yes billion with a b—industry within five years. Also, TouchVision states that the expected growth rate of the mobile gaming industry is 25%. Both claims sounded ridiculous, until we did some research on both existing and upcoming mobile technology. Everyone knows that first-person shooters are some of the most popular games for consoles, and we hadn’t seen anything that could cause the first person shooter to switch platforms—until now. ModdedApps might have created one of the most impressive advances in the mobile gaming world, since the implementation of the Touch Screen itself, with the AppTrigger.

ModdedApps created two different versions of its AppTrigger. The first, named AppTrigger Touch, uses an arm to create an artificial touch to hit the fire spot on the screen. The arm is designed to reach the spots on both tablets and phones, and it uses an electrical charge to simulate touch so it doesn’t need to leave the screen.

The second, AppTrigger Blue, is far more impressive, though that’s not to say the Touch model isn’t. Blue basically takes a mobile device and turns into a cross between console and virtual reality. The Blue model allows users to not only look/aim horizontally and vertically just by moving the AppTrigger, but it also allows for hand gestures (throw grenades, reloading), head gestures (bring AppTrigger close to face to look through the scope), and even jumping and crouching.

The units themselves are incredibly versatile; they can be modified to simulate pistols, shotguns, submachine guns, and assault rifles, while being able to fold up into its own carrying case. On top of that, they are compatible with Apple, Android, and Windows operating systems.

The only bad thing we can say about the AppTrigger, thus far, is that the product isn’t available to the general public yet. Since the innovative product was created by a startup, they’re lacking the funds to start mass production. They are currently raising money on KickStarter to solve that problem. Their page is definitely worth checking out, because it has videos that show the products in use along with a full description and breakdown of both models. 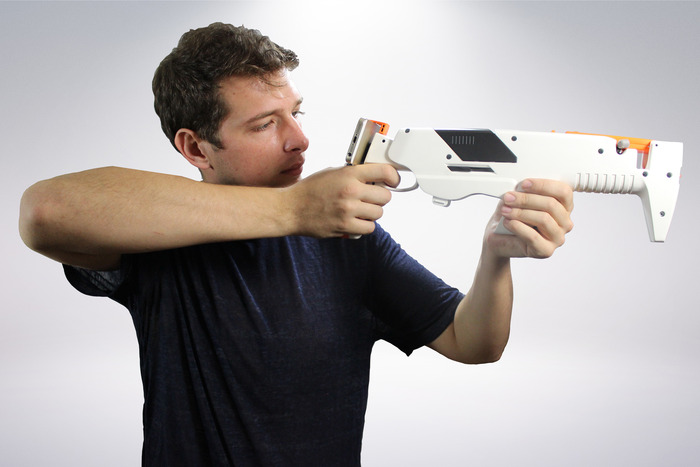 The AppTigger isn’t the only innovation that could push mobile gaming to the top. There are other advances that are pulling business away from traditional PC or web based gaming.

Massively multiplayer online role playing games (MMORPG) have been a longtime staple of the PC-based gaming realm. They allow the players to connect with other players around the world in a fantasy world. World of Warcraft (WoW) has been one of the most popular MMORPGs to date, and its developer, Blizzard, has made moves to include mobile devices.

While mobile devices haven’t had the capability to run such an in-depth game, the WoW app allows its users to view their characters, equipment, and stats. It also allows the users to chat with their guilds. Once mobile devices become advanced enough to handle the processing and memory needs, it won’t be long before we’ll see a fully mobile version of a MMORPG.

The online casino industry is also going mobile. Betfair would be the perfect example of this move, as it has recently gone in this direction. Currently, they have apps for the bingo, casino, poker, and arcade sections. In particular, the Betfair Mobile Arcade allows its players to play a multitude of its normally web-based games, which includes roulette, blackjack, and even Deal or No Deal for real money.

The online casino industry is part of what’s considered the interactive gaming market, which also includes sports betting. Why is this important?

After the research, it has become more feasible that mobile gaming could become a $100 billion/year industry. The mobile gaming industry is currently drawing users away from the web-based gaming. It will be drawing away from the console based gaming in the not so distant future, with products like AppTrigger. While five years might seem to be stretch to reach the $100 billion mark, mobile gaming has been growing at quite the remarkable rate. To think just 10 years ago, the best game on my phone was Snake.