(Spoiler Warning!) So let me break it down for you guys in four words: This. game. Is. Killer. I might seem as if I’m exaggerating, folks, but I think BioShock Infinite is definitely a game worth playing. The BioShock series is noted for its unique environments, tension-building plots, and mostly for its breathtaking combat. Now, we all know the BioShock series for being a crazy, chaotic, first-person shooting, survival horror-like, ADAM-injecting, but fun experience. However, BioShock Infinite takes a major turn in the series. 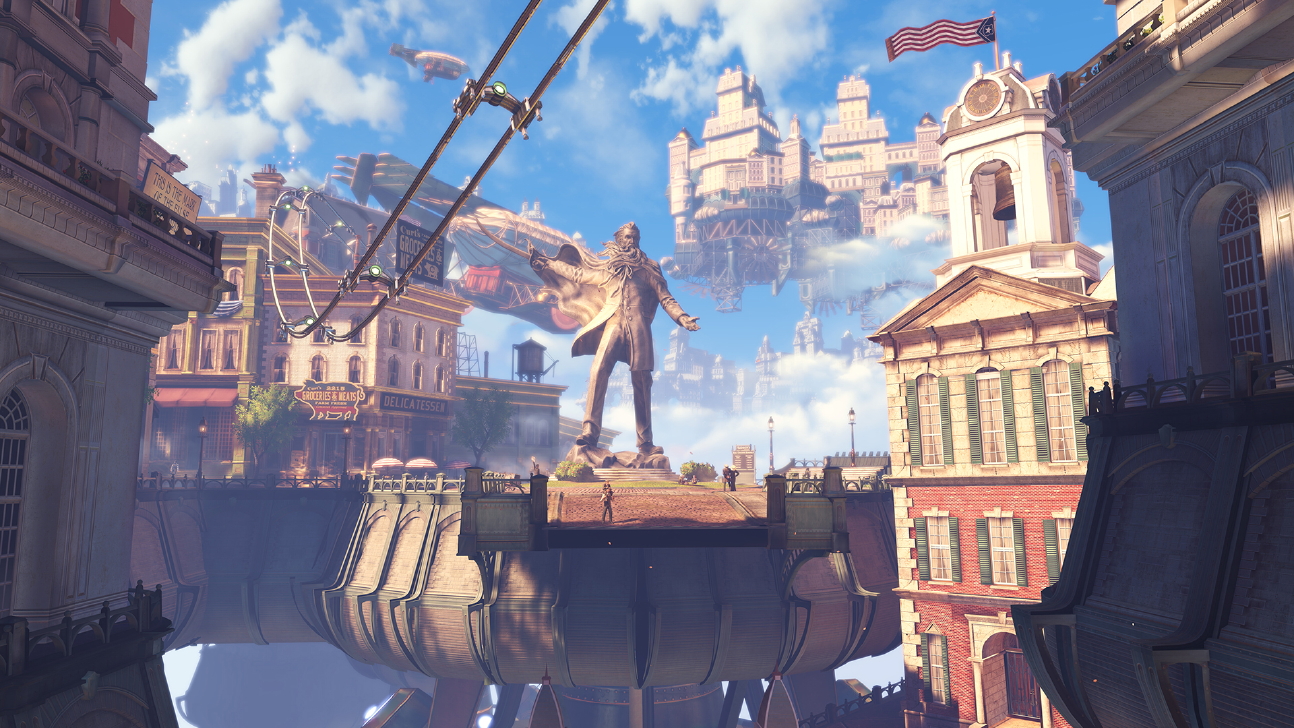 The game takes place in the beautiful flying City of Columbia

One of the most important aspects of this game that gets me jumping is its amazing plot, which can easily get confusing at some points. Taking place in the flying City of Columbia, clearly the exact opposite of Rapture (located underwater), the game serves as a prequel, since the game’s events in Columbia happen in 1912. While the memorable moments with good ol’ Jack occurred back in Rapture during 1960. The protagonist, Booker DeWitt, a former Pinkerton agent is tasked with retrieving a mysterious young woman named Elizabeth from a highly secured tower; it’s kind of like a Rapunzel thing. After watching a brief Baptism scene (which, by the way, garnered tons of criticism from the religious community) the doors to  Columbia opened before me. My facial expression: jaw-dropped. One notable aspect of this game is the visuals. For a moment I felt like I was actually in the game; the structures of the floating apartment buildings were rendered perfectly, the faces of civilians were spotless and realistic looking (barley reused as well). When walking by various NPCs they actually say things a gamer might be interested in hearing which sort of gears you away from just only trying to complete the game. The game’s excellent combination of good visuals and diverse sets of dialogue is perfect for urging players to explore a video game a lot more than usual.

Your first encounter with the lovely Elizabeth

Booker, oblivious to the reason why Elizabeth is imprisoned at the current moment, then sees how Columbians would literally do anything to prevent him from escaping Columbia with her. She is “an investment” Booker states after Elizabeth starts to question her identity. After I extracted her from the tower I started getting caught in more of the game’s combat. Infinite’s combat is a breathtaking experience; I definitely think it did a better job at merging the functions of Plasmids (Vigors in this case) and artillery. I believe that the Vigors were way better than Plasmids. The abilities they offered were much more interesting than the ones Plasmids did in the last two BioShock installments (especially that “Return To Sender” Vigor!). Unlike permanently keeping the weapons in your arsenal, like in the last two BioShocks, Infinite only lets you carry two while you have the option of switching them out with other weapons lying around throughout the game. This new feature probably expresses the developers’ wish to encourage the player to get used to using other weapons, especially if there’s a time when a different kind of weapon might be needed. This, I believe, provides a sense of flexibility for the player, so that he or she may become more powerful.

Elizabeth suffers from trauma after killing Daisy Fitzroy. This is the first time Elizabeth has ever killed anyone.

The photo above brings me to my next topic: the Character Development. Really, the only characters in the game that I think developed the most were Booker, Elizabeth, The Luteces and Zachary Hale Comstock, the game’s main antagonist. Once you finish the game, you’ll realize that the story only revolved around that group of people. I wouldn’t really say that the development of characters is intense enough to agitate your emotions like those of The Last of Us did, but it’s still apart of a pretty good story to follow. Yep, it’s a pretty small cast of characters, but regardless of their size they still make a pretty big difference that not only affects the plot but also affects Columbia itself.

Okay, gettin’ kind of tired :P so let me talk about Sound Editing really quickly. The game’s sound effects are some pretty amazing stuff to listen to. It was a mix of both unique and strange sounds that certainly had me intrigued. The airships of Columbia make a ton of different sounds that sound really weird yet at the same time cool. The citywide intercom also had a strange sound it played before the announcer spoke, especially when Comstock was about to talk *shrugs*. The gunshots and explosions sound effects were also spot on, as the team at Irrational Games had claimed to have gone to a shooting range to record the sounds for in-game use (nicely done :D).

A Handyman. One of the game’s most intimidating enemies.

One of the things I love about the BioShock series is its creation of unique and strange, yet deadly kinds of enemies. Happily take note that fighting enemies in this game does not require much thinking, and that most of the time all you have to do is blow up as many things as you possibly can. That’s something any gamer would love to do, right? Unfortunately, the enemies do the same to you. They don’t think either, they’ll just keep firing at you with everything they got until you’re dead, so take cover often! At first, the game goes easy on you by throwing the small fries at you first; policeman, constables,sky police , you name it. But when I was playing the game, I heard a cop shout out to his friend “Don’t worry! The Fireman will get him!” So, I was all like “Pfft…HA! Probably just a cop in a red and yellow uniform or something!” until I actually saw that it was a literal Fire Man (abnormal giant, flaming, steam-punk cyborg)! After that part, guys, I just had to watch my back from then on because that’s when the real tough ones (Crows and Handymen) started coming in. Tougher enemies will then start to mix in with the small fries and will sometimes even push you into the critical thinking zone.

BioShock Infinite is by far one of the best games I have ever played, and I also think it’s the best game in the series as well. After all the crazy events and plot twists, the game’s story deserves the most praise. The only problem is that I wish it would have lasted longer. Whenever there’s a good story at hand, I really prefer a lengthy duration; but I guess the developers thought the story would get boring if they made it longer than it was. I tell you one thing though, the credits were long as hell! However, one thing I would have wanted to be in this game is a Multiplayer mode. That would have definitely been something to make it even better!

This concludes my BioShock Infinite Review. This is my very first article and I’m really excited! Next, I might review the game’s upcoming DLC: “Burial At Sea”